On January 20, Donald J. Trump will take the oath of the office to become the 45th President of the United States. In all likelihood, when he takes the oath, he will place his left hand on a Bible and raise his right hand in the air. This is the tradition for presidential oath-taking in recent years, but just how far back does this tradition go?

George Washington, our nation’s first president, established innumerable precedents for how a President should act. These precedents, however, did not include raising his right hand when he took the first oath of office in New York in March 1989.

While there are no photographs of the event, this artist’s rendering shows Washington placing his right hand on a Bible, while his left hovers over his heart.

Another artist depicted more or less the same stance: right hand on the Bible, left hand by his side and resting on the hilt of his sword.

So when did Presidents start raising their right hands? It’s not entirely clear.

Drawings of early presidential inaugurations can be hard to find, and of course, you can never be sure whether the drawing depicts what really happened or is just a product of the artist’s imagination.

In 1817, James Monroe became the fifth President of the United States. At his swearing-in, Monroe followed Washington’s lead and placed his right hand on a Bible and kept his left hand by his side.

Andrew Jackson Puts His Hand Up

In 1829, Andrew Jackson ascended to the presidency riding a wave of white populism. In this portrait, Andrew proudly holds his right hand high. This is the earliest depiction of a President that I could find of where the President’s right hand is up and left hand is on the Bible.

You might think, then, that Andrew Jackson kicked off the tradition of raising your right hand and the practice stuck from then forward, but that doesn’t appear to be the case.

Abraham Lincoln Puts His Hand Down

Abraham Lincoln, the sixteenth president, seems to have reverted to Washington’s model of right hand on Bible and left hand down for at least his second inauguration.

Ulysses S. Grant, the eighteenth president, seems to have followed Lincoln’s lead. While I couldn’t find a drawing of Grant’s first inauguration, at his second, he puts his right hand on the Bible and keeps his left hand by his side.

In 1877, after a bitterly contested election, Rutherford B. Hayes ascends to the presidency. Hayes, it seems, decided not to touch a holy book and instead raised his right hand and kept his left hand by his side.

James Garfield and Chester Arthur both followed Hayes’s lead when they were sworn in as president in 1881, Garfield first, and then Arthur after Garfield was assassinated.

So it would seem that, by this point, the matter is settled. Right hands go up during swearing-ins. But not necessarily.

In 1889, Benjamin Harrison in a rain-soaked ceremony put his right hand on the Bible and kept his left hand down.

William Mckinley became president in 1897. He seems to have thrown all tradition to the wind and put his left hand on the Bible and kept his right hand by his side.

A few months after his inauguration, McKinley is assassinated, and his Vice President Theodore Roosevelt becomes President, at the relatively tender age of 41. In a sketch of the hurried swearing in, Roosevelt holds his right hand high and uses his left to clutch the lapel of his jacket. 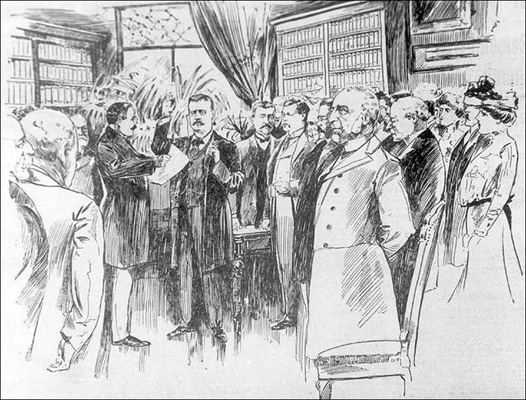 Roosevelt’s second inauguration was a more formal affair, and here again we have a photograph. While the angle is not ideal, it seems clear that Roosevelt indeed is raising his right hand while his left hand hangs by his side.

When Is This Tradition Going to Start?

Roosevelt was followed by William Howard Taft, but I could not find a photo of Taft’s inauguration. In 1913, however, Woodrow Wilson becomes President, and Wilson goes his own way, placing his right hand on a Bible and holding the Bible with his left hand.

The next President is Warren G. Harding, who takes the oath of office in 1921. Unlike his immediate predecessor, Harding clearly raises his right hand and keeps his left hand by his side.

Calvin Coolidge, Harding’s successor, also goes with the right hand up and the left hand down.

Just when you think the tradition is firmly established, Herbert Hoover comes along and goes back to putting his right hand on the Bible and keeping his left hand down.

And then in 1933 we get to Franklin Delano Roosevelt, the man who will take the oath of office of the President of the United States more times than any other person in the country’s history. As he takes the oath for the first time, he stands with his right hand held high.

So that’s it then, right? Right hands up  it is. That is, until the next person, which is Harry S. Truman, Roosevelt’s Vice President, hastily inaugurated in the waning days of World War II after Roosevelt’s sudden death. What does Truman do in his private swearing-in ceremony? It looks like right hand on top of the Bible and left hand underneath it.

Truman’s second inauguration in 1949 is more clear. This time, Truman clearly takes the oath with his right hand raised.

Can We Call It a Tradition Yet?

In 1953, Dwight D. Eisenhower, the General who was the Supreme Allied Commander during World War II, becomes President with his right hand raised.

And he does the same thing for the beginning of his second term in 1957.

At this point, it’s right hands up all the way through. For completeness, pictures of the other presidential swearing-in ceremonies follow. 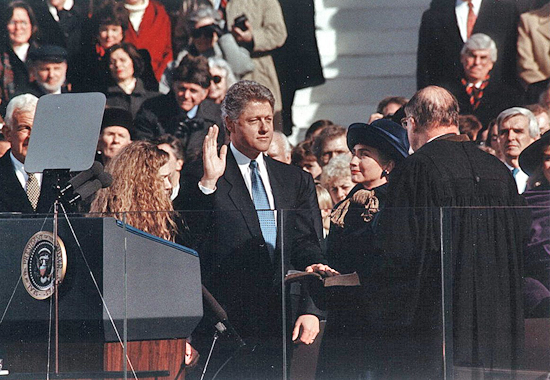 So that’s it. It seems that the tradition of raising the right hand to take the oath of office became firmly established in the twentieth century. What this stroll through history shows, however, is that even though it may seem that right hands raised may be the only way to take an oath, it has not always been so in our nation’s history. Time’s change, and even seemingly firmly rooted traditions are susceptible to the shifting sands of time.

Good news in the fight against unreliable eyewitness identifications. This week the U.S. Department of Justice released guidance on steps law enforcement agents should take to reduce the chance of influencing a witness when a witness tries to make an identification from a photo array.

A photo array is a group of photos shown one at a time or all at once to a witness who is asked by police whether he or she sees the perpetrator in the array. The array may or may not include the suspect.

Possibly, the most significant reform is that federal agents investigating crimes should administer photo arrays using a “blind” procedure, meaning that the person who shows the witness the photos shouldn't know which photo in the array is of the suspect. The idea is to make it impossible for the person showing the photos to signal (consciously or unconsciously) to the witness which photo the police think that the witness ought to pick.

The DOJ guidance is just the latest of a growing recognition in legal circles that eyewitness identifications often cannot be trusted.

In 2012, the Supreme Court of Oregon pushed this insight significantly forward when it explicitly embraced the large body of social science research that shows that the confidence of eyewitnesses  in their identifications was not a reliable measure of accuracy and that witnesses were highly susceptible to having their memories shaped by subtle and not-so-subtle cues from police and prosecutors. To minimize the risk of identifications produced by suggestive procedures, the Oregon high court required prosecutors to prove that the identifications they wanted to introduce into evidence were not obtained using suggestive procedures.

Also in 2012, the Supreme Court of Kansas put an end to the practice in that State of telling jurors that the “certainty” of a witness was a good reason for believing or disbelieving an eyewitness identification.

These, and other developments like them, will go a long way toward ensuring that judges and juries who must weigh the testimony of eyewitnesses have the best information available when they are making decisions where justice hangs in the balance.

Dan Park
Dan Park is a graduate of Yale Law School and a member of the American Law Institute. Dan has won numerous professional honors, including in 2014 being recognized by the San Diego Business Journal as the top General Counsel in San Diego for Large Nonprofits. He is the author of The Legal Mind: How the Law Thinks, and How Would You Rule? Legal Puzzles, Brainteasers, and Dilemmas from the Law’s Strangest Cases. On Twitter Dan is @danparkathome.